Working from home (which many of us have been forced to do for the past few months, whether we want to or not) can be more productive than being in an office — provided you have a comfortable and functional place to work within your home. Unfortunately, for many who have been suddenly thrown into this situation, the best space they have to work is on a small laptop at a dining room table.

If you’re used to working at a desk with a large monitor, having to do the same job on a laptop at a table can be frustratingly confining. And since you also need to use this space for other activities when you’re not working, it may not be feasible to set up a traditional monitor or desktop computer there.

A portable, USB-C powered monitor might be just the right thing to upgrade your laptop-only dining room workstation. You can set it up in seconds, it plugs into your computer with a single cable, and when you’re done for the day, you can close it up just as quickly as you close your laptop, allowing you to reclaim the space for other uses. 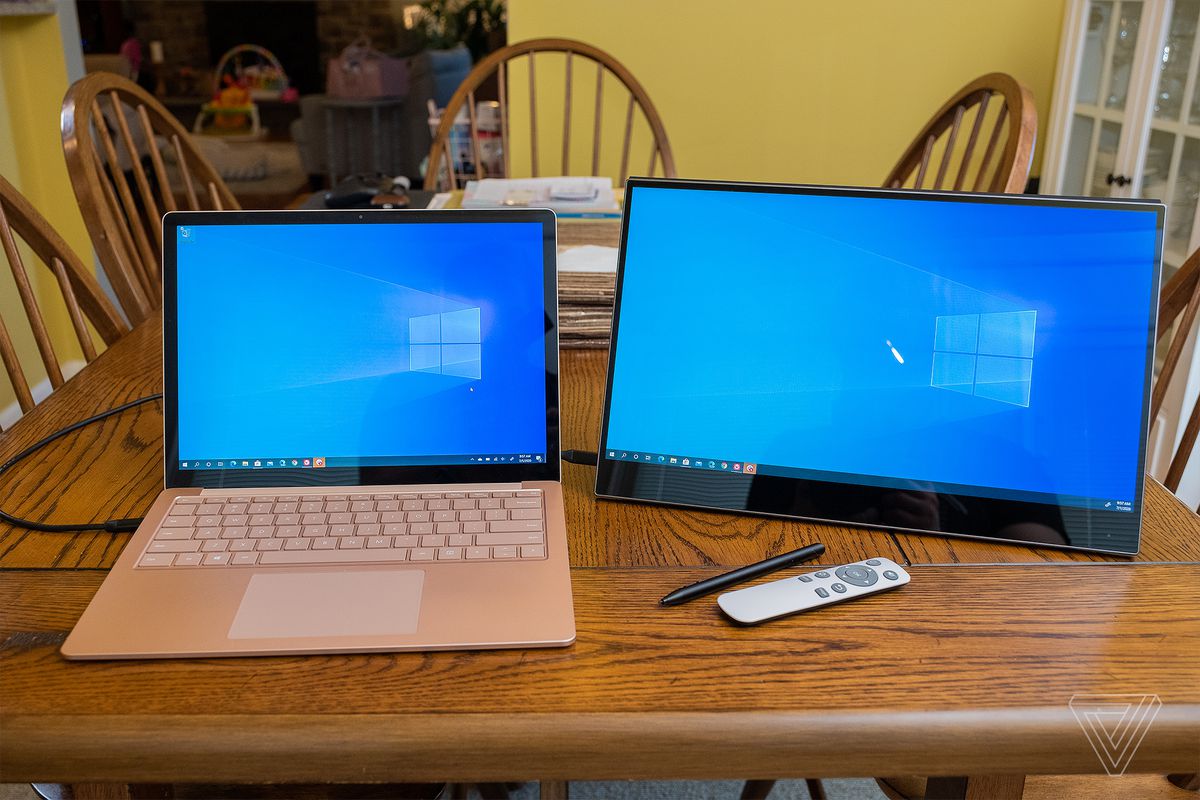 The Ananta comes with a pressure-sensitive pen and an IR remote.

For the past couple of weeks, I’ve been testing the Ananta, a 17.3-inch, 1080p portable touchscreen monitor. It’s plug-and-play with most modern laptops — just connect the included USB-C cable to your laptop and to the display; your computer should immediately recognize the monitor and power it on. It then provides you with an expansive second screen that’s likely bigger than the display inside your laptop.

The Ananta can also be used as a display for many other devices, including a Nintendo Switch, a Raspberry Pi, a Blu-ray player, or even a desktop computer, though you’ll need to connect some of them with HDMI. If you have a recent Huawei or Samsung phone, you can use it to access their respective desktop modes. The Ananta comes with a magnetic case that acts as a kickstand, weighs about 2.4 pounds, and is less than six millimeters thick at its thinnest point. It’s about as portable as a 17.3-inch screen can be.

When plugged into a Surface Laptop 3, the Ananta’s large screen completely changed my workflow, allowing me to spread my windows out across much more screen real estate than I had before. Instead of flipping between virtual desktops, I was able to have my chat windows and browser visible all the time. During Apple’s recent WWDC keynote, I was able to watch the live stream on the Ananta while I collaborated with my teammates on the Laptop 3’s main display. 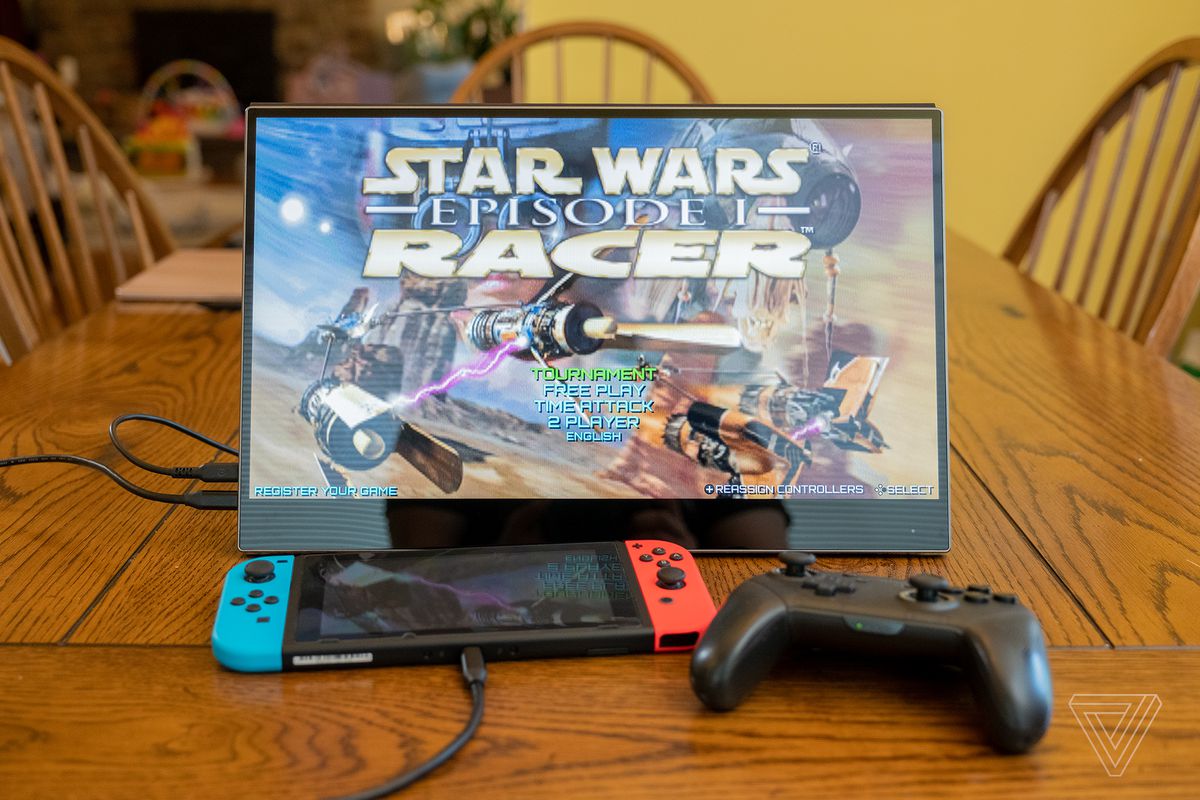 You can use the Ananta’s big screen as a pop-up gaming rig with a Nintendo Switch or other console. Photography by Dan Seifert / The Verge

There are some consequences to using a big, bright USB-C display with your laptop. The obvious one is battery life — the Ananta caused my laptop’s battery to drain about twice as fast as normal. Fortunately, there are actually two USB-C ports (plus HDMI, a USB-A port, and a 3.5mm headphone jack) on the Ananta, which allow you to use pass-through charging. Plug a powerful enough charger into one port and it will power both the secondary display and your laptop. I was able to use a 45-watt charger to power both the display and my laptop, but it wouldn’t work with either a 60-watt or 100-watt power bank, so your mileage might vary.

The other issue is audio — the Ananta has two speakers on the back, but they sound rather terrible. You’re better off using your laptop’s native speakers for sound.

The Ananta’s touch functionality is what makes it stand out among the many other USB-C displays available, and it even comes with a pressure-sensitive stylus for doodling or writing on the display. (It’s also compatible with Microsoft’s Surface Pen.) Touch functionality meant I could just tap something on the screen instead of trying to move my mouse cursor across the seemingly miles of display space I now had. Unfortunately, I wasn’t able to get the touch feature to work with a Mac or the Switch.

As for the quality of the display itself, the panel gets surprisingly bright. The 1080p resolution may seem low on paper, but wasn’t an issue in practice. Though I don’t have a calibration device on hand to test it, the color reproduction isn’t quite as good as the Surface’s display to my eyes. Still, it’s contrasty and vibrant for watching video and playing games. I just wouldn’t use it for color-critical creative work. Its 60Hz refresh rate won’t be ideal for intense PC gaming, but it’s fine for console games and any productivity work. There are some limited display controls available through an on-screen menu, and the Ananta comes with an IR remote that lets you change the brightness or access that settings panel.

Finally, there’s price. Right now, the Ananta is available through a Kickstarter campaign, with deliveries promised for September of this year. As of this writing, the lowest price you can get the display for is $359, and it is expected to retail for a rather steep $599 when it hits general availability. If you go for the Kickstarter deal, the price is reasonable for how large, versatile, and well the Ananta works. But at full price, it may cost nearly as much as the laptop you’re plugging it into, at which point you have to wonder if it’s worth it.

Either way, the Ananta does solve a pain point for the unique circumstances many of us are in.

Photography by Dan Seifert / The Verge