In 2019, in the US alone, more than 10,000 startups raised more than $133 billion in venture funding, with a large proportion of that equity investments. Today, a company building a platform to help startups consider alternative routes to financing — specifically less dilutive options that give up less or no equity in the process — is announcing a round of funding of its own to ramp up its activity.

Capital, which has built an AI-based platform called the “Capital Machine” that ingests details about your company to provide tips on how to optimise it and — if you make at least $5 million in annual recurring revenue — to provide offers of financing (typically between $5 million and $50 million, at a 5-15% interest rate, and typically within a day of asking for it), has raised a further $9 million, a “Seed 2” that it will use to continue expanding the Capital Machine’s functionality.

The funding is coming from an interesting group of investors. It’s being led by AME Cloud Ventures (the investment firm led by Jerry Yang, who once founded Yahoo), with participation also from Future Ventures (Steve Jurvetson’s fund), Greycroft, Wavemaker Partners, Partech, and angels including Howard Morgan (of Rentech and First Round Capital) and Stuart Roden (former Chairman of Lansdowne Partners).

Many of these are repeat backers: this second seed round comes about 8 months after Capital launched with its first seed funding of $5 million.

When Capital launched last October, it also announced $100 million on its balance sheet to distribute as loans: it hasn’t disclosed how much of that is now dispersed but Blair Silverberg, the CEO who co-founded Capital with Csaba Konkoly and Chris Olivares, said the company has mostly been “heads down building the Capital Machine” in the last 8 months. It also says that its users have aggregate annual sales of $3 billion between them, so there are definitely customers onboarded.

Silverberg also hinted that in the coming months, it’s due to announce more news on financing sources as it continues to scale, which sounds like it is gearing up to announce strategic partners, perhaps other funds or banks, who will be adding to that investing pool as well.

Before founding Capital, Silverberg worked closely with Steve Jurvetson as an investor at DFJ (which last year rebranded as Threshold Ventures), and in that capacity got a lot of experience with the equity-based investment model.

That wasn’t an entirely happy picture, though: Silveberg could see that for every company that got funded there were so many more that couldn’t be considered, either because of sheer volume, or because of investment theses that VCs are using, or some kind of “investment bias” as Silverberg described it.

On top of that, even when money was there for the taking, founders were giving up equity to take it, in some cases so much after several years and several rounds of funding that one had to question if that was always the best route to take.

And finally, while there have always been alternatives to equity funding, many don’t seem to have the right routes to access them because they are too small. Venture debt has largely been handled by big banks and other institutional firms, and thus has largely been used by the larger startups that these bigger firms consider.

His idea was to use the advances of AI, software-as-a-service and the surge of interest (and, I would add, trust) in fintech and running financial services online to build something that could give founders and CFOs of smaller startups an alternative to consider, which took into account the fact that done right it could be a win-win for financiers and those getting funded.

“A tech company does not instantly mean a risky company these days,” said Silverberg. “It’s fascinating to us that tech companies have not had the tools to slice and dice their financing financing options. But the cost of capital can be the key advantage for a company.”

The aim initially has been to target tech companies, as these are the most typical recipients of equity investments from VCs, but Silverberg said that the picture is bigger than that.

“The Capital Machine is very generalised,” he said about the analytics capabilities of the platform, and thus its customer targets. “We can look at merchant shipping fleets or an insurance agency or a SaaS company or a media property. We can look at and understand any business. But we have found that there is the biggest cultural misunderstanding among those that started life with venture backing.” 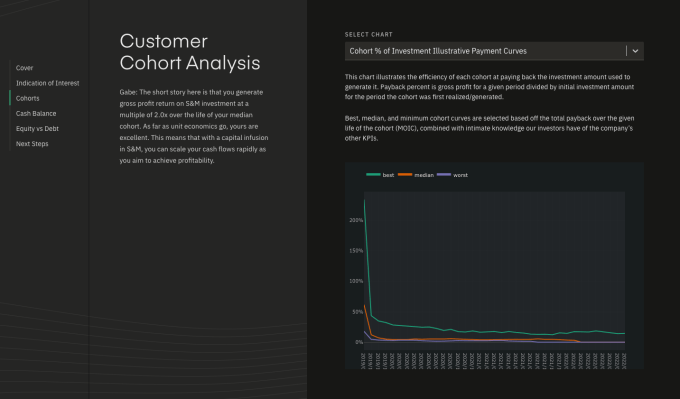 He said that thousands have tapped the Machine for insights, which are free to get (indeed the data is helpful for the Capital Machine regardless as it continues to learn more about businesses each time it gets used). But in practice, the pool of those taking loans is smaller and typically splits 50/50 between those that are taking Capital debt to meet all of their funding requirements, and those that are taking it in combination with other kinds of financing, including equity funding.

It is somewhat ironic that Jurvetson — who eschewed making deals for internet and enterprise companies while at DFJ — would now be backing a SaaS company essentially offering a B2B service.

“Since the 90s I have avoided most of the categories of traditional investment, such as internet and enterprise software,” he admitted in an interview. “Oh, yet another B2B retailer or exchange. There are just too many clones, so I shifted to nanotechnology and other areas and delegated those to my partners.”

But notwithstanding that he knows and seems to really like Silverberg — “We know each other and there is a high degree of trust there,” he said. “It’s a deep business relationship.” — he also through his years of investing also saw the disparities of the model, and decided it was time to back an alternative.

“I was trying to put my finger on what it is that so empowering of bringing frictionless capital to companies that don’t show up on my radar screen,” he said. “Currently venture capital dollars flow into a small small amount of companies that are sucking up too much capital, and on the investor side, you are basing the decision too much on an excel spreadsheet. It’s the worst strategy.”

The idea of applying a new and clever piece of software to fix that is just a good business idea, he added, which has a lot of potential also to extend to offering a range of other financial services to startups. “The more software-centric [the solution] is, the more the headroom you have. It’s enormous and then it’s just, can they execute?”

That may have been the question to ask about startups getting funded in genera, but it’s also the big question for Capital, which is not the only one that has identified the opportunity to sit alongside VCs as an alternative for startup funding. Others that have also raised money to build their own non-dilutive financing platforms include Clearbanc, which recently tweaked its model specifically to help startups struggling in Covid-19 times with their runway; Lighter Capital; Wayflyer aimed at e-commerce companies; and many more.