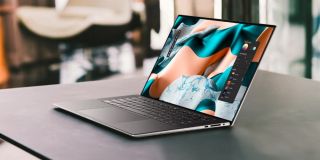 The reveal of the Dell XPS 15 2020 is likely very close, but it looks like Dell’s Chinese arm has hit the go button a little early by prematurely posting a listing of the new Dell XPS 15 9500.

The listing, flagged by Notebookcheck, pretty much confirms a lot of the stuff we've already heard about the next XPS 15. But one neat little addition is that the XPS 15 will come in an Arctic White version, much like the latest Dell XPS 13.

We’re expecting the XPS 15 to be revealed this week, so we haven’t got long to wait until we get the full lowdown on what to expect from Dell's next flagship. However, the premature listing did confirm that the XPS 15 will make use of Intel’s 10th-generation Core i5-10300H and Core i7-10750H Comet Lake processors.

The model with the Core i5 processors wasn’t listed with a dedicated graphics card, while the Core i7 machine has an Nvidia GeForce GTX 1650 Ti. The former model is set to cost around $1,550 and the latter machine will set buyers back around $2,817.

Those prices make the new XPS 15 a reasonably expensive machine especially if you want the dedicated GPU. However, given the new MacBook Pro 2020 costs $1,799 for a model with the latest Intel chips and no dedicated graphics card, the Dell XPS 15 2020 starts looking like a more compelling machine. It specs also look set to trounce the MacBook Pro, with both the more powerful CPUs and dedicated graphics likely to give the XPS 15 the edge.

And it’s worth noting that while the XPS 15 might be more expensive than other 15-inch Windows 10 laptops, it’s a very capable premium machine. With a dedicated graphics card, it can not only make a suitable and rather portable workhorse machine, but can also handle some triple-A gaming; just don’t expect screamingly high frame rates.

For people wanting a little more power from an XPS laptop, then the Dell XPS 17 2020 also looks to be coming very soon. That laptop will not only have a 17-inch display but it’s set to have access to some of the most powerful Intel mobile CPUs as well as a GeForce RTX 2060 graphics card.

With the new XPS line, Apple’s MacBook Pro range, as well as the latest Windows 10 laptops, look to soon have some stronger rivals to contend with.