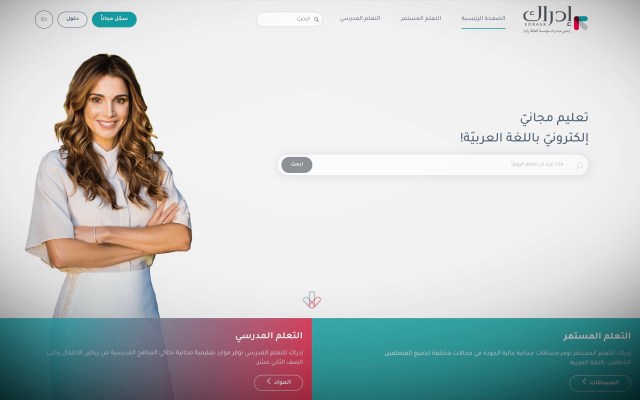 Edraak, an online education nonprofit, exposed the private information of thousands of students after uploading student data to an unprotected cloud storage server, apparently by mistake.

The nonprofit, founded by Jordan’s Queen Rania and headquartered in the kingdom’s capital, was set up in 2013 to promote education across the Arab region. The organization works with several partners, including the British Council and edX, a consortium set up by Harvard, Stanford and MIT.

TurgenSec, which runs Breaches.UK, a site for disclosing security incidents, alerted Edraak to the security lapse. A week later, their email was acknowledged by the organization but the data continued to spill. Emails seen by TechCrunch show the researchers tried to alert others who worked at the organization via LinkedIn requests, and its partners, including the British Council.

Two months passed and the server remained open. At its request, TechCrunch contacted Edraak, which closed the servers a few hours later.

In an email this week, Edraak chief executive Sherif Halawa told TechCrunch that the storage server was “meant to be publicly accessible, and to host public course content assets, such as course images, videos, and educational files,” but that “student data is never intentionally placed in this bucket.”

“Due to an unfortunate configuration bug, however, some academic data and student information exports were accidentally placed in the bucket,” Halawa confirmed.

“Unfortunately our initial scan did not locate the misplaced data that made it there accidentally. We attributed the elements in the Breaches.UK email to regular student uploads. We have now located these misplaced reports today and addressed the issue,” Halawa said.

The server is now closed off to public access.

It’s not clear why Edraak ignored the researchers’ initial email, which disclosed the location of the unprotected server, or why the organization’s response was not to ask for more details. When reached, British Council spokesperson Catherine Bowden said the organization received an email from TurgenSec but mistook it for a phishing email.

Edraak’s CEO Halawa said that the organization had already begun notifying affected students about the incident, and put out a blog post on Thursday.

Send tips securely over Signal and WhatsApp to +1 646-755-8849. You can also send files or documents using our SecureDrop. Learn more. Scientists Taught Robot Fish How to Swarm, Which Could Improve Autonomous Cars