Wednesday’s crypto market correction put a heavy burden on the FEI project, the latest attempt at creating an algorithmic stablecoin that would remain stable in the face of market turbulence. Due to the particular mechanics of the protocol, the FEI token became impossible to sell as its main liquidity pool quotes a negative price for the token.

The Fei protocol is a recently-launched project that has immediately attracted billions in liquidity and total value locked by selling its FEI token, an algorithmic stablecoin using the concept of Protocol-Controlled Value to maintain a peg with the U.S. dollar.

Crucial to the protocol’s functioning is the ETH-FEI Uniswap pool, which is largely controlled by the protocol. The pool has been expressly designed to track the price of the ETH-USDC pool as closely as possible. The protocol sends most of the Ether it receives from FEI buyers to the ETH-FEI incentivized pool, ideally supplying plenty of liquidity to facilitate trading.

To maintain the peg, the protocol limits how much selling can occur through the incentivized pool. This happens by burning a significant fraction of FEI tokens used in the sale, which has the result of massively decreasing its effective price. The burn penalty is equal to the square of FEI price’s percentage distance from the $1 peg — at a price of $0.9, the penalty is approximately 100%. Further deviations paradoxically result in a negative price, which should mean that FEI sellers would need to pay buyers in ETH for the “privilege” of holding FEI. In practice, the exchange transaction simply fails under these price conditions and nobody is allowed to sell FEI on this pool.

The situation was highlighted by Banteg, core developer at Yearn.finance, who compiled a chart of Fei’s effective price on its incentivized pool: 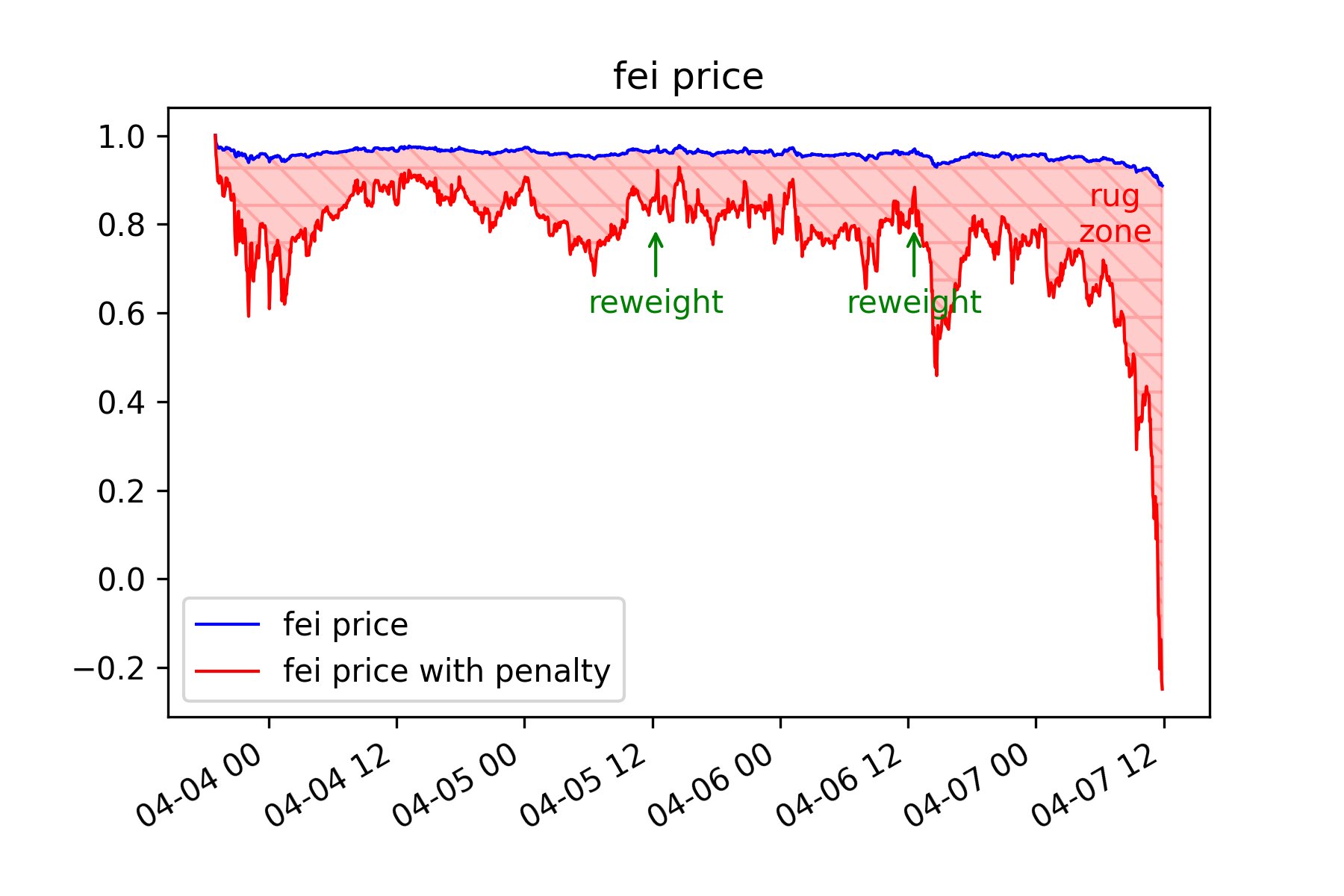 Another failed experiment, or a temporary hiccup?

The extremely aggressive burn penalty means that the main liquidity pool for the project, which holds over $1 billion in protocol-controlled Ether, is unusable for selling FEI. The token currently has two main parallel markets: a FEI-DAI Uniswap pool and the MXC centralized exchange. On the Dai pool, FEI is still trading at $0.76 but it only has $11 million in total liquidity, while MXC supports $500,000 in liquidity at a range above $0.7. Given that there are 2.4 billion FEI tokens circulating, only a tiny fraction of the supply can currently be sold.

The Fei protocol has a number of powerful backers and advisors, including investors like a16z, Coinbase Ventures, Nascent, Framework Ventures and Buckley Ventures. Robert Leshner, founder of Compound and Robot Ventures, is a prominent backer as well. He publicly pledged to buy any amount of FEI at $0.7, and so far, it appears nobody took him up on the offer.

In a conversation with Cointelegraph, Leshner explained that the protocol is in a limbo state due to a bug:

“Fei uses incentives to maintain a peg, by applying a penalty when users sell below $1, and paying a rebate when users buy Fei below $1. The purchasing rebate mechanism was disabled yesterday due to a discovered vulnerability; for the time being, Fei isn’t functioning.”

Indeed, the protocol’s white paper details a “carrot and stick” approach to keeping the peg, with additional FEI being offered to traders who bought below the $1 mark. Earlier on Wednesday, the team reported that it had disabled the “carrot” part of the mechanism due to a vulnerability.

Despite the apparent complexity, Fei’s mechanism is based on a similar principle to most fiat currencies, where central banks often use their own reserves of gold and foreign currencies to back their currency’s value during periods of strong selling pressure. Direct restrictions on selling are also not new, with countries like Lebanon, Venezuela and Turkey offering recent examples of enacting stringent capital controls in a bid to stabilize their currency’s value.

Ultimately, the success of the reserve-based mechanism depends on the market’s overall trust in the currency. The Turkish government has all but exhausted its reserves after many years of attempting to stop the lira’s decline.

All things considered, holders seem to be remaining patient. Given Fei’s heavy restrictions on liquidity, the fact that it is trading relatively close to $1 and nobody is yet taking up Leshner on his offer, are good signs for the project. Whether the experiment will ultimately succeed after the bug is fixed is still an open question.