Mike Garcia, G.O.P. House Candidate, Is Ahead in California - The New York Times

VALENCIA, Calif. — Mike Garcia, a Republican political newcomer and former military pilot, appeared to have a comfortable lead over his Democratic opponent late Tuesday in a special election to fill a House seat in Southern California. A victory would give the Republican Party a lift ahead of November in an election that was held mostly by mail and reflected the nation’s bitter partisan mood.

Mr. Garcia and Christy Smith, a Democratic member of the State Assembly, were competing to replace former Representative Katie Hill, who resigned last year after admitting to an affair with a campaign staff member. They will meet again in November, when both candidates are planning to run for a full term.

Mr. Garcia had a lead of nearly 12 percentage points over Ms. Smith with roughly three-quarters of precincts reporting. If he wins, it would be the first time a Republican had flipped a previously Democratic House seat in the state since 1998, and would clinch a two-for-two showing by the G.O.P. in Tuesday’s special House elections.

In rural northern Wisconsin, Tom Tiffany, a Republican state senator, handily beat Tricia Zunker, a Democratic school board member. But his roughly 14-percentage-point margin of victory in a district President Trump won by 20 points in 2016 demonstrated that rural voters in a key battleground state may be slipping away from Mr. Trump in the midst of the coronavirus pandemic.

The California race in particular became a microcosm of national politics amid the pandemic. Negative advertisements blanketed the airwaves in suburbs north of Los Angeles, and national Republicans, led by Mr. Trump, repeatedly tried to sow doubts about the integrity of the election, suggesting without evidence that the contest was “rigged.”

At the same time, with California now set to conduct the November election primarily through the mail, the contest was also a kind of practice run. The debate over vote-by-mail has grown increasingly rancorous and partisan, with Republicans portraying it as ripe for fraud, without evidence.

In the district, California’s 25th Congressional, where Latinos make up the second-largest group of voters, Mr. Garcia was seen as a top-notch recruit for Republicans. The party has struggled to shore up its support from Latino and Asian voters in such diverse suburban districts of Southern California.

A victory for Mr. Garcia would most likely be seized upon by party leaders who are eager to show that the president maintains support in the kinds of suburban areas that Democrats are counting on to win back the White House. Even before the pandemic, Democrats had tried to cast the race as a referendum on Mr. Trump, a message they hoped would resound with voters who supported Hillary Clinton in 2016 by nearly seven points.

All of the roughly 425,000 registered voters in the district received a ballot by mail, postage paid, so that they only had to fill it out and slip it back in the mailbox.

For weeks leading up to Election Day, Republicans appeared to be sending back their ballots at a higher rate than Democrats. And in recent days, Democrats had begun to tamp down expectations, saying that Ms. Smith would fare better against Mr. Garcia in November, when they will face off for the seat again and when there is expected to be more voter enthusiasm for the presidential election.

With just seven polling places open in the 25th District for in-person voting, the vast majority of voters cast their ballots by mail. The voting centers were largely set up in parking lots across the suburban district, with a steady trickle of voters showing up wearing face coverings, while poll workers wiped each machine between uses.

Those who chose to vote in person said they did so either because they had not received a ballot by mail or because they did not trust the United States Postal Service.

“The system is rigged,” said Robert Buchanan, a 41-year-old Santa Clarita resident who lost his job in film production in March. A staunch Republican, Mr. Buchanan echoed the doubts voiced by the president. “This is the only way I can try to make sure that my vote matters, and even then, will it really?”

Though the overwhelming majority of ballots were sent by mail, several voting centers were open Tuesday, primarily for those needing assistance or same-day voter registration. That, too, drew criticism from Mr. Trump and other Republicans, who blasted the decision to add a voting center in Lancaster — despite the fact that the move was supported by the longtime Republican mayor of the city, who supports both Mr. Garcia and the president.

Democrats had privately worried that Ms. Hill’s resignation had left the party vulnerable in the district. In 2018, liberal activists from Los Angeles flocked to the district to knock on doors and register new voters, which helped to fuel one of the most high-profile victories for Democrats in the midterm elections.

In Wisconsin, Democrats tried to spin Ms. Zunker’s defeat, saying the margin was evidence that Mr. Trump and Republicans are losing ground in the state. 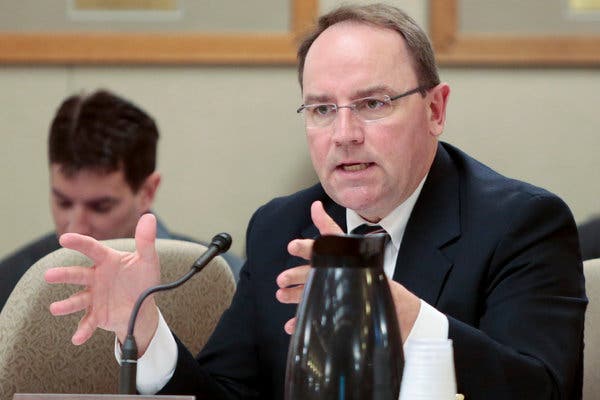 “Trump’s base is cracking,” said Ben Wikler, the chairman of the Democratic Party of Wisconsin. “Rural voters are running away from Trump because they know they can’t afford four more years of his broken promises in the Oval Office.”

Anna Kelly, a spokeswoman for the Trump campaign in Wisconsin, called Mr. Tiffany’s victory “a win for President Trump and Tom Tiffany that demonstrates the enthusiasm behind our president across Wisconsin.”

In addition to Mr. Trump’s 20-point victory in the district in 2016, Representative Sean P. Duffy won re-election in 2018 by 22 points. Even a small slippage from Mr. Trump’s 2016 support could damage his chances of carrying Wisconsin, a state he won by just 22,748 votes four years ago.

Mr. Duffy, a Tea Party darling whom Republicans tried to persuade to run for the Senate in 2018, resigned from his seat last year to care for a baby born with health complications.

Wisconsin’s election was the state’s second in six weeks to take place with in-person voting amid a health crisis that has otherwise shut down most public life in America. Gov. Tony Evers, a Democrat, sought to delay the contests and hold all-mail voting, but he was blocked by Republicans in the State Legislature and the conservative-controlled Wisconsin Supreme Court.

President Trump has long tried to court black voters, but he has only fleetingly addressed the pandemic’s outsize impact on black Americans. A special election in California will fill former Representative Katie Hill’s seat. Wisconsin and Nebraska also held votes. Follow the live results. Get an email recapping the day’s news Download our mobile app on iOS and Android and turn on Breaking News and Politics alerts Listen to our podcast, The Field, on Apple Podcasts and Spotify
Read Entire Article