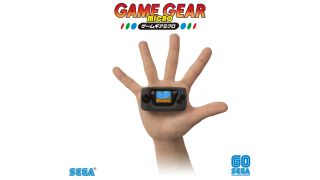 Sega is celebrating its 60th anniversary in Japan by releasing a Game Gear Micro on October 6, a console so small that it barely looks like it will be functional.

The palm-sized Game Gear Micro will cost 4,980 yen (around $45 / £35 / AU$65) and comes with a minuscule 1.15 inch screen. It will also be available in a variety of colors, including blue, yellow, red and the standard black. Each color has different games included, so Sega’s probably hoping that fans will buy more than one version of the teeny weeny console.

If you do opt to buy all four versions of the Game Gear Micro, which can be bought as part of one convenient package for 27,255 yen (about $250), you’ll get a Big Window Micro lens that mounts on the console to make its screen usable to human beings.

The Game Gear Micro is powered by two AAA batteries or a USB connection, and even includes a headphone jack (shame on you, Apple). It also provide save states for your games, which means you can cheese even the most difficult sections of your favorite retro titles.

Here's what you get depending on which model you buy:

The Black model comes with Sonic The Hedgehog, Puyo Puyo 2, Out Run and Royal Stone.

What is this, a Game Gear for ants?

Sega’s Genesis Mini, which was released last year, was incredibly well-received by retro fans and did a great job of shrinking the iconic 16-Bit console. Clearly that wasn’t small enough, though, as the this latest retro console reimagining is easily the smallest remake yet, and makes the Game Boy Micro look a bit chunky in comparison.

Despite the Game Gear Micro making a mockery of players’ eyesight, there’s something incredibly tempting about owning such a petite piece of Sega’s history. Not only is it a cool collector’s item, but the Sega Game Gear marked Sega’s first and last foray into the handheld market.

Sadly there’s no indication that Sega is bringing the hand-cramp inducing console to other territories yet, but if it proves popular in Japan and the demand is there, we could all be squinting at a tiny, barely visible version of Sonic the Hedgehog soon.